Thomas Peterffy was born in the basement of a Budapest hospital on Sept. 30, 1944. His mother had been moved there because of a Soviet air raid. After the Soviets liberated Hungary from Nazi occupation, Hungary became a satellite state, laboring under a different kind of oppression: communism. Peterffy and his family, descended from nobles, lost everything. “We were basically prisoners there,” he says. As a young man Peterffy dreamed about being free from that prison–in America.

At the age of 20 he hatched an escape plan. At the time Hungarians were allowed short-term visas to visit family in West Germany, and he took advantage of this. When his visa expired, like millions who have immigrated to the U.S. illegally in recent years, he didn’t go back home. Instead he left for the U.S. Peterffy landed at John F. Kennedy International Airport in New York City in December 1965. He had no money and spoke no English. He had a single suitcase, which contained a change of clothes, a surveying handbook, a slide rule and a painting of an ancestor. 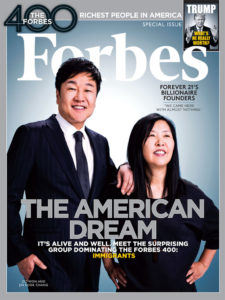 Do Won and Jin Sook Chang. Cover photo by Ethan Pines for Forbes.

Peterffy went to Spanish Harlem, where other Hungarian immigrants had formed a small community, moving from one dingy apartment to another. He was happy, if not a bit afraid. “It was a big deal to leave home and my culture and my language,” he says. “But I believed that in America, I could truly reap what I sowed and that the measure of a man was his ability and determination to succeed. This was the land of boundless opportunity.”

Indeed it was. He got a job as a draftsman in a surveying firm. When his firm bought a computer, “nobody knew how to program it, so I volunteered to try,” he says. He caught on quickly and soon had a job as a programmer for a small Wall Street consulting firm, where he built trading models.

0
0
Share Now
About Scipreneur Private Limited 562 Articles
“Scipreneur” is a combination of two words; “Science and Entrepreneur”. Scipreneur provides a bridge to connect various ventures, businesses, researchers, and service providers. We also publish news and current advancements in the science that has a strong potential to enter the market.