Patent is the Starting, Not the End!

Many patent attorneys, especially pay-for-services outside counsel, are giving terrible advice that is purely self-serving. Their advice is only designed to put money in their pocket at the expense of their clients, but masquerades by “helping” the company.

The biggest problem: most outside counsel care only about getting patent to issue, not using them in a business. The patent attorney’s end goal is getting a Notice of Allowance. For their clients, this is where the process begins.

They should not be selling clients useless patents that only line their pockets and drain the startup company’s precious resources. While many of these practices might be technically not inaccurate, they are disingenuous and self-serving, causing well-meaning entrepreneurs to spend money on patents they do not need.

These practices reduces the entrepreneur’s capital and their chances for success, but it also damages the patent bar’s reputation. Entrepreneurs are being told that patents are a waste of time or to do it themselves. This comes back to bite the profession when there is rising sentiment that patents are a waste of time for a startup. The patent bar has itself to blame.

Here are a few myths that patent attorneys use to sell patents to unsuspecting small businesses:

Most startup companies are fed the lie that filing a “cheap” provisional patent application “holds their place in line” and they are “protected.” This is just not true.

A thin provisional application – one that is filed quickly and cheaply – almost always does not include enough information to enable the claims. This means that they create prior art that is cited against them later, but they do not have enough support for the claims they really want.

The patent application will protect only the claims it would support. Even a well-written non-provisional application will typically protect a specific inventive concept, which probably does not protect the entire “business.” However, this is what the unscrupulous patent attorney will sell to the startup CEO.

What is the result? The startup company starts telling everyone about their invention. They lose their international patent rights, and they make critical business decisions based on the misconception that they are somehow protected. The protection only comes after they file the non-provisional a year later, but the realization that their business decisions were misinformed will come much later. In many cases, that may be too late. But the patent attorney was paid in full.

Myth #2: Provisional applications are secret and therefore not part of the public record.

The provisional application is most certainly part of the public record.

The sad part is that the client does not realize the damage that can be done by filing omnibus provisional applications that have way too much information in them. This leads us to:

Myth #3: It is good to put as much information as possible in your patent application.

Many attorneys file provisional patent applications that are not constructed the same way as they would file non-provisional applications. Remember that a well-drafted application begins with the claims that focus on a specific point of novelty, and then the figures and specification are written to support those claims. A well-drafted patent application does NOT disclose any unnecessary trade secrets that are not required under the quid pro quo with the government.

Unscrupulous attorneys will file virtually anything – pages from a lab notebook, a cocktail napkin, a company’s PowerPoint pitch deck, whatever – and put a provisional cover sheet on it. 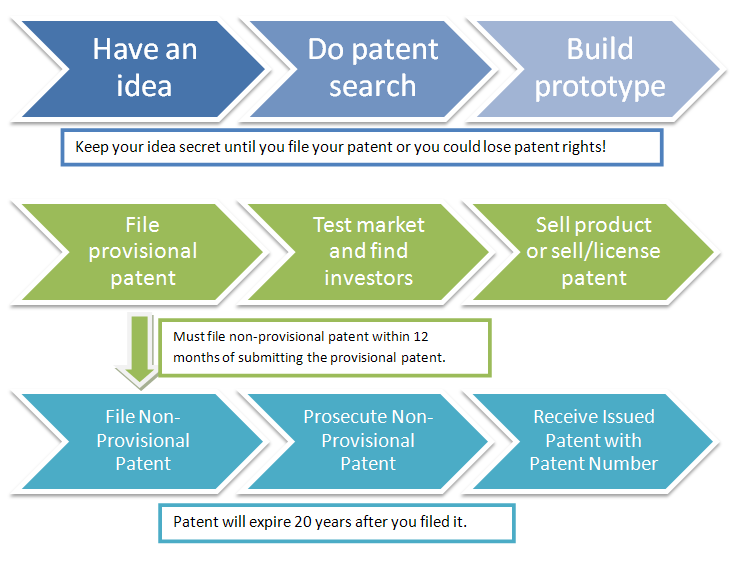 These attorneys are not meeting their obligation to their client to represent them as best they know how, and it is shameful that any attorney would take the passive-aggressive stance that “the client told me to do it” when the attorney knows that it is not in the client’s best interest. The attorney has a fiduciary duty NOT to do what could be potentially harmful.

Patent attorneys who represent startup companies often pile enormous amounts of information into a patent application, especially provisional patent applications. These are often done “on a budget” (an excuse that does not justify the practice).

The patent bar needs to focus on helping businesses, not just feeding off of them. However, the USPTO is also to blame.

The USPTO tries to “help” inventors by suggesting that they self-file provisional patent applications. Not only does the inventor waste precious time, but you can be assured that any resulting patent would have many of the endless fatal flaws that sink a patent that might be licensed or sold.

The USPTO would be a much better citizen to the startup community if it educated people on the entire lifecycle of a patent, not just getting the patent awarded. When you consider that the USPTO can make more fees from patent maintenance than from the filing/prosecution phase, the USPTO’s interests would be better served by focusing their education on what happens after the patent is granted, not before.

For a startup company, the process BEGINS when the patent is issued.

0
0
Share Now
About Scipreneur Private Limited 557 Articles
“Scipreneur” is a combination of two words; “Science and Entrepreneur”. Scipreneur provides a bridge to connect various ventures, businesses, researchers, and service providers. We also publish news and current advancements in the science that has a strong potential to enter the market.