Roche (SIX: RO, ROG; OTCQX: RHHBY) today announced encouraging results from the Phase II IMmotion150 study that compared TECENTRIQ® (atezolizumab) plus Avastin® (bevacizumab) and TECENTRIQ monotherapy to sunitinib alone in people with previously untreated, locally advanced or metastatic renal cell carcinoma (mRCC). These results were presented at the 2017 Genitourinary Cancers Symposium taking place from February 16-18 in Florida, USA. IMmotion150 is the first randomised clinical trial to evaluate the combination of TECENTRIQ and Avastin in mRCC. The study was designed to inform further clinical development of this combination and these study results reinforce the potential of this combination in this setting. 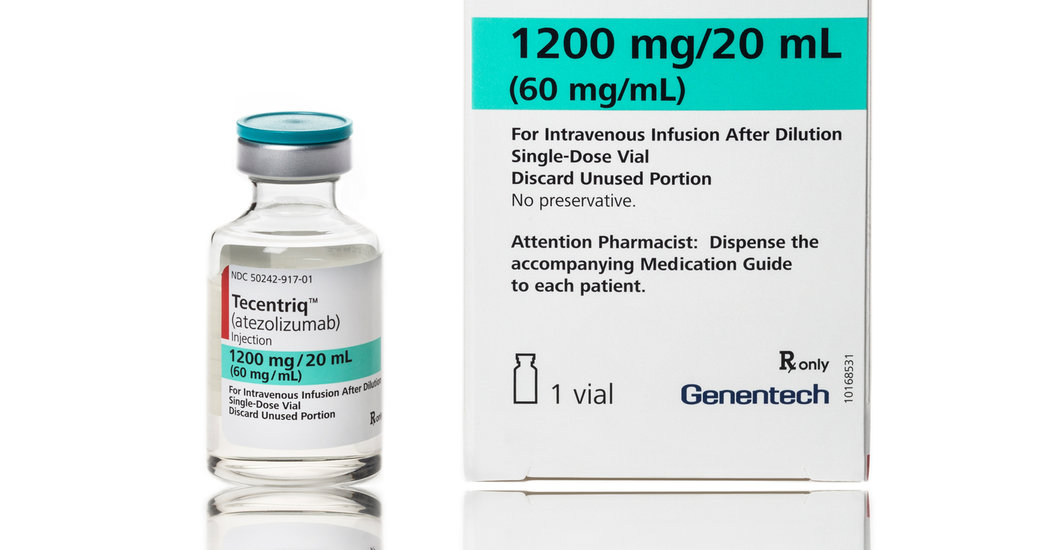 The study showed that people whose disease expressed PD-L1 (programmed death-ligand 1) and were treated with TECENTRIQ plus Avastin had a 36 percent reduction in the risk of their disease worsening or death compared to people treated with sunitinib alone (median progression-free survival [mPFS]: 14.7 vs. 7.8 months; HR= 0.64; 95% CI 0.38, 1.08). No PFS advantage was observed compared to sunitinib in the intention-to-treat [ITT] population (mPFS: 11.7 vs. 8.4 months; HR = 1.00; 95% CI 0.69, 1.45). Median Duration of Response (DoR) has not yet been reached after 20.7 months of follow-up across treatment arms. Adverse events in the TECENTRIQ plus Avastin arm were consistent with those observed in previous studies of each medicine.

“These Phase II results support the scientific rationale for potentially combining TECENTRIQ and Avastin in people with this type of kidney cancer,” said Sandra Horning, MD, Chief Medical Officer and Head of Global Product Development. “There is a significant need for new treatment options for people living with advanced RCC, a disease where currently only about one in 10 people are alive beyond five years following diagnosis.”

Roche is also evaluating TECENTRIQ plus Avastin vs sunitinib in a Phase III study (IMmotion151; NCT02420821) in people with previously untreated, locally advanced or metastatic RCC. A study of TECENTRIQ as adjuvant treatment for RCC began enrolling earlier this year.

The co-primary endpoints were PFS per RECIST v.1.1 via Independent Review Facility (IRF) assessment in all randomised patients (ITT population) and in the PD-L1 selected (IC1/2/3) subgroup. PD-L1 expression was assessed on tumour-infiltrating immune cells (IC) with an investigational immunohistochemistry (IHC) test based on the SP142 antibody being developed by Roche Tissue Diagnostics. Secondary endpoints included IRF-assessed overall response rate (ORR) and duration of response (DoR), investigator-assessed PFS, ORR, DoR and safety, and overall survival (OS). A summary of the efficacy data from Arms A, B and C of the IMmotion150 study is included below.

IMmotion150 was designed with planned crossover. Over three quarters (78 percent) of sunitinib patients (Arm C) who progressed subsequently received TECENTRIQ plus Avastin (Arm A) OS results were immature at time of analysis with only 35 percent of events having occurred.

Renal cell carcinoma (RCC) is the most common type of kidney cancer and forms when abnormal cells develop in the small tubes (known as renal tubules) in the kidneys. Each year about 338,000 people are diagnosed with kidney cancer globally accounting for nearly 145,000 deaths worldwide.1 The disease is more prevalent in males and people aged 55–74 years.2 Currently there is a significant need for more effective treatments with only about one in ten people alive five years post diagnosis.2

TECENTRIQ is a monoclonal antibody designed to target and bind to a protein called PD-L1 (programmed death ligand-1), which is expressed on tumour cells and tumour-infiltrating immune cells. PD-L1 interacts with PD-1 and B7.1, both found on the surface of T cells, causing inhibition of T cells. By blocking this interaction, TECENTRIQ may enable the activation of T cells, restoring their ability to effectively detect and attack tumour cells.

With the initial approval for advanced colorectal cancer in 2004, Avastin became the first anti-angiogenic therapy made widely available for the treatment of patients with an advanced cancer. Today, Avastin is continuing to transform cancer care across the world through its proven survival benefit (overall survival and/or progression free survival) in several types of cancer, including colorectal cancer, non-small cell lung cancer, kidney cancer, breast cancer, ovarian cancer, cervical cancer, and glioblastoma. Avastin has made anti-angiogenic therapy a fundamental pillar of cancer treatment today with over 2.4 million patients treated with this medicine so far. With one of the largest clinical development programmes ever seen in oncology, Avastin will continue to transform how patients are treated as ongoing studies seek to understand the full potential of this medicine and its combinations with the most cutting edge therapies in development.

About Roche in cancer immunotherapy

For more than 50 years, Roche has been developing medicines with the goal to redefine treatment in oncology. Today, we’re investing more than ever in our effort to bring innovative treatment options that help a person’s own immune system fight cancer.

The aim of personalised cancer immunotherapy (PCI) is to provide patients and physicians with treatment options tailored to the specific immune biology associated with a person’s individual tumour. The purpose is to inform treatment strategies which provide the greatest number of people with a chance for transformative benefit. In the case of TECENTRIQ, the goal of PD-L1 as a biomarker is to explore PD-L1 expression on tumour cells and tumour infiltrating immune cells and how that correlates with clinical benefit either as a monotherapy or in combination, and across a broad range of tumour types. The Roche PCI research and development programme comprises more than 20 investigational candidates, ten of which are in clinical trials.

PCI is an essential component of how Roche delivers on the broader commitment to personalised healthcare. To learn more about the Roche approach to cancer immunotherapy please follow this link:

Roche is the world’s largest biotech company, with truly differentiated medicines in oncology, immunology, infectious diseases, ophthalmology and diseases of the central nervous system. Roche is also the world leader in in vitro diagnostics and tissue-based cancer diagnostics, and a frontrunner in diabetes management.

Founded in 1896, Roche continues to search for better ways to prevent, diagnose and treat diseases and make a sustainable contribution to society. The company also aims for improving patient access to medical innovations by working with all relevant stakeholders. Twenty-nine medicines developed by Roche are included in the World Health Organization Model Lists of Essential Medicines, among them life-saving antibiotics, antimalarials and cancer medicines. Roche has been recognised as the Group Leader in sustainability within the Pharmaceuticals, Biotechnology & Life Sciences Industry eight years in a row by the Dow Jones Sustainability Indices (DJSI).

The Roche Group, headquartered in Basel, Switzerland, is active in over 100 countries and in 2016 employed more than 94,000 people worldwide. In 2016, Roche invested CHF 9.9 billion in R&D and posted sales of CHF 50.6 billion. Genentech, in the United States, is a wholly owned member of the Roche Group. Roche is the majority shareholder in Chugai Pharmaceutical, Japan. For more information, please visit www.roche.com.

All trademarks used or mentioned in this release are protected by law.

0
0
Share Now
About Scipreneur Private Limited 562 Articles
“Scipreneur” is a combination of two words; “Science and Entrepreneur”. Scipreneur provides a bridge to connect various ventures, businesses, researchers, and service providers. We also publish news and current advancements in the science that has a strong potential to enter the market.